Bitcoin mining generates new bitcoins by running specialized software on specialized computers. This software solves math problems and confirms transactions which are bundled together in a block and saved to the Bitcoin blockchain. You can think of the blockchain as a ledger, and the block is a collection of transactions that have been carried out by sending bitcoins or fractions of bitcoins between different addresses.

So essentially mining is a verification process to validate Bitcoin transactions and provide security for the public ledger of the Bitcoin network. The speed at which you mine Bitcoins is measured in hashes per second.

Bitcoin mining can be complicated, expensive, and not always profitable. Nonetheless, mining is fascinating for many people interested in cryptocurrency as it can be compared to printing money, something that until now has been the preserve of kings or governments. 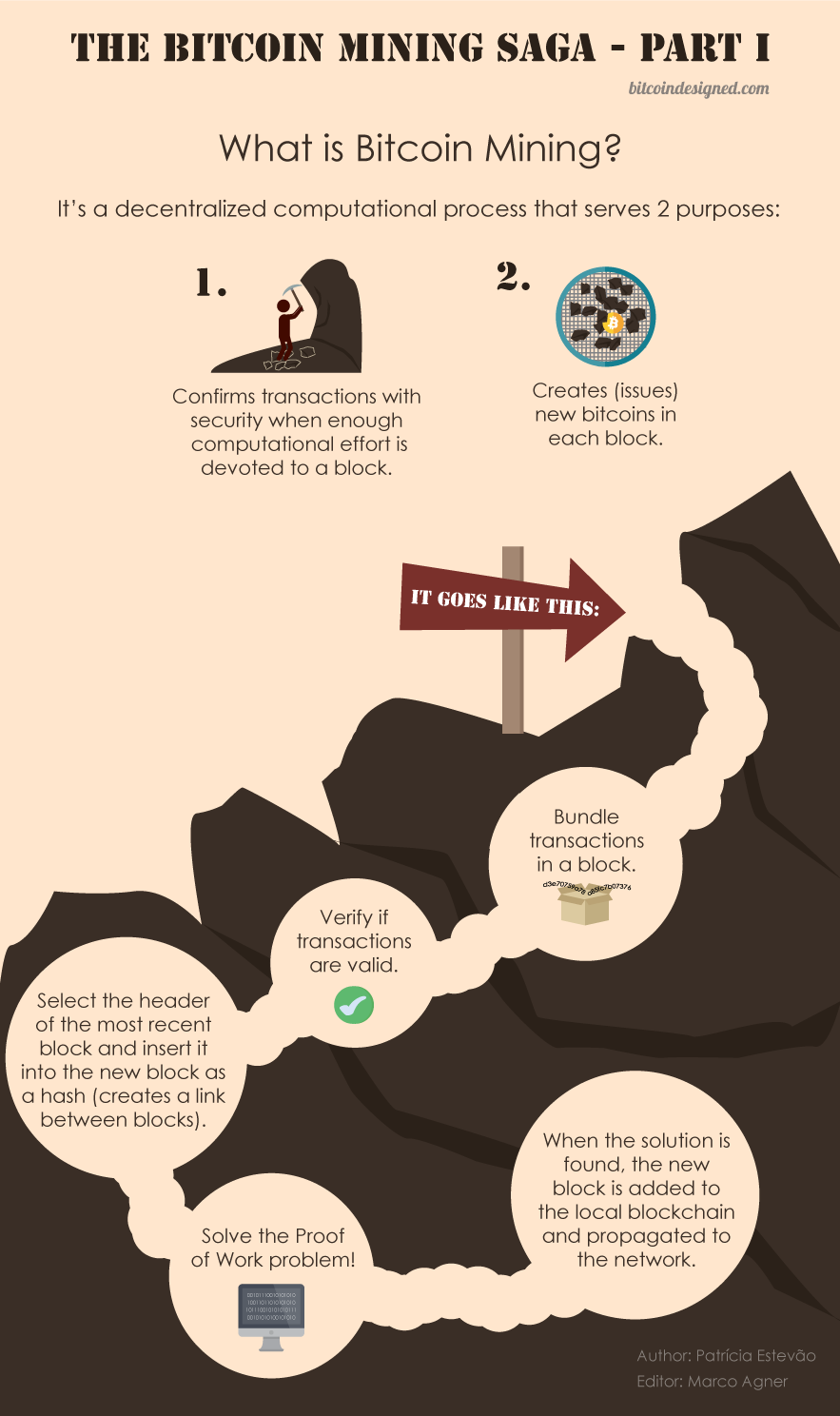 By mining, you can earn cryptocurrency without paying for it using fiat currency (USD, EUR, JPY, etc). Mining also serves a second important purpose. It is the only way to release new cryptocurrency into circulation. Miners are the equivalent of a central bank that ‘prints’ money.

At the time of writing, there are about 17.5 million bitcoins in circulation and all of those Bitcoin came into existence because of miners. If miners, Bitcoin would still exist and be usable, but there would never be any additional Bitcoin and there would also be no way to confirm transactions, so the Bitcoin network or Blockchain would stop working. There will come a time when Bitcoin mining ends; per the Bitcoin Protocol, the number of Bitcoin will be capped at 21 million, and after that miners will be necessary to confirm transactions.

Miners participate in updating the ledger of Bitcoin transactions by using powerful, purpose-built computers to guess a random number that solves an equation generated by the system. The more powerful your computer is, the more guesses you can make in a second, increasing your chances of winning this game. If you manage to guess right, you earn bitcoins and get to write an entry into the Bitcoin ledger of transactions on the blockchain. At the moment every time you ‘guess’ correctly you are awarded 12.5 bitcoins. This number changes every four years and is known as the halving as the amount is reduced by half, so the next block reward will be 6.25 bitcoins per block 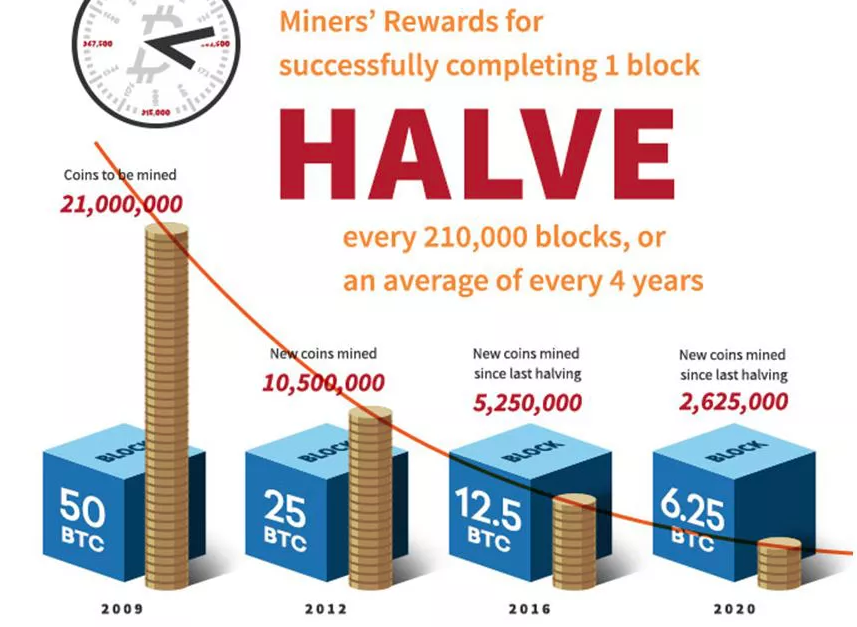 In the early days of bitcoin, it was possible to mine with your computer CPU or high-speed video processor card. Today that’s no longer possible. Custom Bitcoin ASIC chips offer performance up to 100x the capability of older systems that have come to dominate the Bitcoin mining industry.

Bitcoin mining with anything less will consume more in electricity than you are likely to earn. It’s essential to mine bitcoins with the best bitcoin mining hardware built specifically for that purpose.

So that’s Bitcoin mining in a nutshell. It’s called mining because of the fact that this process helps “mine” new Bitcoins from the system. But if you think about it, the mining part is just a by-product of the transaction confirmation process. So the name is a bit misleading since the main goal of mining is to maintain the ledger in a decentralized manner.

As you can imagine, since mining is based on a form of guessing, for each block, a different miner will guess the number and be granted the right to update the blockchain. Of course, the miners with more computing power will succeed more often, but due to the law of statistical probability, it’s highly unlikely that the same miner will succeed every time.

What are miners doing that’s so important that they get paid in bitcoin?

Bitcoin miners are getting paid for their work as auditors. They are doing the work of verifying previous Bitcoin transactions. This is known as Proof-of-Work (POW) and is one of the key innovations that was conceived by Bitcoin’s founder, Satoshi Nakamoto, and makes it the tremendously secure ledger that it is. By verifying transactions, miners are preventing any bitcoins from being spent more than once, also known as a double-spend.

Double spending means, as the name suggests, that a Bitcoin user is illicitly spending the same money twice. With physical currency, this isn’t an issue: Once you hand someone a greenback $20 bill to buy a bottle of vodka, you no longer have it, so there’s no danger you could use that same $20 to buy lotto tickets next door. With digital currency, however, as the Investopedia dictionary explains, “there is a risk that the holder could make a copy of the digital token and send it to a merchant or another party while retaining the original.”

Let’s say you had one legit $20 and one really good photocopy of that same $20. If someone were to try to spend both the real bill and the fake one, someone who took the trouble of looking at both of the bills’ serial numbers would see that they were the same number, and thus one of them had to be false. What a Bitcoin miner does is analogous to that–they check transactions to make sure that users have not illegitimately tried to spend the same Bitcoin twice. This isn’t a perfect analogy we’ll explain in more detail below.

Once a miner has verified 1 MB (megabyte) worth of Bitcoin transactions, they are eligible to win the 12.5 BTC. The 1 MB limit was set by Satoshi Nakamoto, and is a matter of controversy, as some miners believe the block size should be increased to accommodate more data.

Note that I said that verifying 1 MB worth of transactions makes a miner eligible to earn Bitcoin – not everyone who verifies transactions will get paid out. That’s because despite all the high-tech equipment and software being used luck also plays a part in deciding which miner gets rewarded.

It is not only advanced math or computation that is involved. Miners are not solving difficult mathematical problems, they are actually trying to be the first miner to come up with a 64-digit hexadecimal number (a “hash”)  that is less than or equal to the target hash. It’s basically guesswork.

To create a valid block, the mining software has to find a hash that is below the difficulty target.

One difficulty is a number that regulates how long it takes for miners to add new blocks of transactions to the blockchain. Because the target is such an unwieldy number with tons of digits, people generally use a simpler number to express the current target. This number is called the mining difficulty.  This difficulty value updates every 2 weeks to ensure that it takes 10 minutes (on average) to add a new block to the blockchain. The difficulty is so important because, it ensures that blocks of transactions are added to the blockchain at regular intervals, even as more miners join the network. If the difficulty remained the same, it would take less time between adding new blocks to the blockchain as new miners join the network. The difficulty adjusts every 2016 blocks. At this interval, each node takes the expected time for these 2016 blocks to be mined (2016 x 10 minutes), and divides it by the actual time it took. 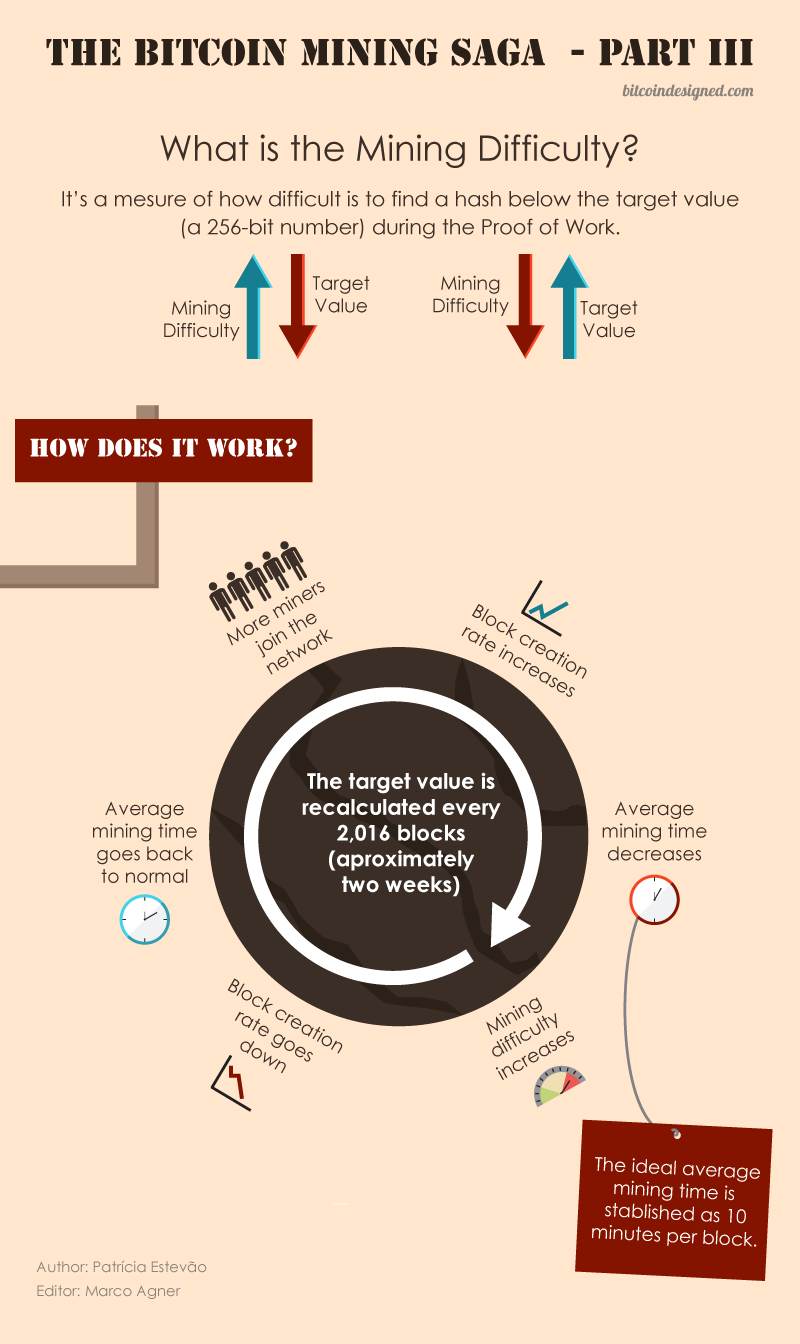 Now that you know what Bitcoin mining is, you might be thinking, “Cool! Free money! Where do I sign up?” Well, not so fast… Satoshi Nakamoto, who invented Bitcoin, crafted the rules for mining in a way that the more mining power the network has, the harder it is to guess the answer to the mining math problem.

So the difficulty of the mining process is actually self-adjusting to the accumulated mining power the network possesses. If more miners join, it will get harder to solve the problem; if many of them drop off, it will get easier. This is known as mining difficulty. Below you can see a graph that shows the difficulty adjustment that has occurred over the last two months as a factor of price, speed of block generation and total hash power across the bitcoin network.

What equipment do I need to mine?

Bitcoin mining started out using a normal CPU as you have on a desktop or laptop computer, then they found that they could mine faster with graphic cards (GPUs) and now they only use application-specific integrated circuit (ASIC) computers. These can cost from around $500 to the tens of thousands.

Bitcoin mining with anything less will consume more in electricity than you are likely to earn. It’s essential to mine bitcoins with the best bitcoin mining hardware built specifically for that purpose.

Another option is to purchase in Bitcoin cloud mining contracts. This greatly simplifies the process but increases risk because you do not control the actual physical hardware. Unfortunately like any new industry, there have been a number of bitcoin cloud mining scams.

It is possible that an ASIC device purchased today would still be mining in two years if the device is power efficient enough and the cost of electricity does not exceed its output. Mining profitability is also dictated by the exchange rate but under all circumstances the more power efficient the mining device, the more profitable it is because of the difficulty adjustment built into the bitcoin mining algorithm we outlined earlier.

Unfortunately, as good as the ASICS there are some downsides associated with Bitcoin ASIC mining. Although the energy consumption is far lower than graphics cards, the noise production is very high, so they must be housed in an industrial facility. Additionally, ASIC Bitcoin miners produce a lot of heat and are all air‐cooled, and therefore temperatures can exceed 150 degrees F. Also, Bitcoin ASICs can only produce so much computational power, so customers generally have to buy these machines in bulk if they want to start a serious Bitcoin mining business, also known as a mining farm. The other option is to join a pool, subscribe to cloud mining, or take part in a new service known as mining as a service (MaaS).

What is Cloud Mining?

The key to making bitcoin mining profitable is to keep your overheads low. If you are a cloud mining company and you’re spending money on advertising, marketing, and nice offices, then your overheads make it very hard to mine at a profit.

A cloud mining company like Genesis does a lot of marketing and has a lot of those types of expenses so they need to cover their costs and the way they do that is through the mining profits and their customer’s mining profits.

Mining contractors provide mining services with performance specified by contract, often referred to as a “Mining Contract.” They may, for example, rent out a specific level of mining capacity for a set price at a specific duration.