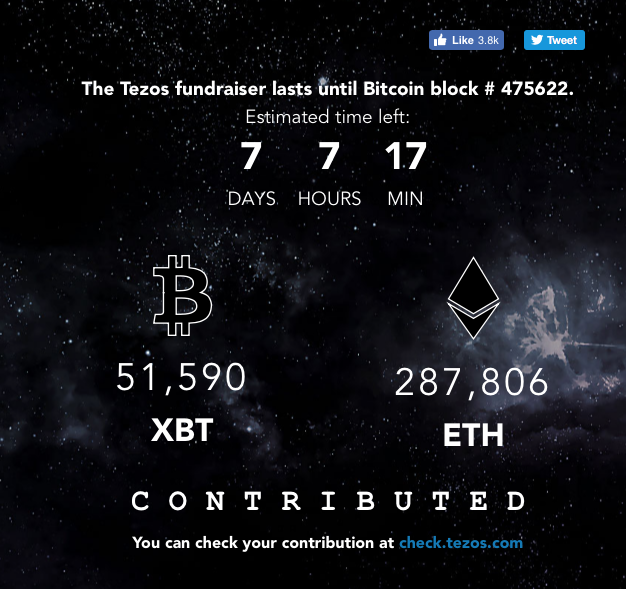 When you have blockchain, and a lot of people willing to invest in startups, then who needs IPO’s. The Initial Coin Offering (ICO) for Tezos, a blockchain startup which has tapped into this exciting new source of funding, and has raised over $210 million in just five days. This makes Tezos the biggest ICO in history and with the sale scheduled to continue for another 7 days, it may end up raising nearly half a billion dollars.

Recently, blockchain startup Block.One hit a record funding, raising around $185 million in the first five days of the crowdsale. Prior to that, another startup, called Bancor, netted nearly $150 million in contributions during the first three hours of its ICO.

What makes Tezos different from a recent surge in similar such offerings, is that this ICO is not based on Ethereum and instead operates on an entirely new blockchain, a “self-amending cryptoledger” that rewards developers who upgrade the network’s protocols and allows for “seamless,” consensual upgrades of those protocols (read the white paper here for more detail). Which  makes it a competitor to Ethereum.

Established by a husband and wife team, Arthur and Kathleen Breitman, Tezos is an independent smart contract system built as an alternative to Ethereum. The platform has been under development over the last three years. Arthur Breitman previously worked at the high frequency trading desk at Goldman Sachs and served as an options market maker at Morgan Stanley. Meanwhile, Kathleen Breitman is a former management associate at Bridgewater. The startup is focused on “transparency, security and governance by consensus as fundamental design goals.”

The Tezos tokens, Tezzies or XTZs, can be purchased with both Bitcoin and Ethereum, and as of this morning, there is no scarcity of demand: Tezos has already raised 53,575 BTC and 273,838 ETH, for a total of approximately $210 million at current prices. This already makes the Tezos ICO the largest in history (overshadowing the recent Bancor ICO, which raised $153 million). It may also explain the ongoing drop in ETH prices observed in recent days.

Another important point: unlike many recent ICOs, the Tezos ICO is uncapped, meaning there’s no upper limit of funds the company can raise, what is likely to drive a widespread distribution of tokens. Initially the token sale was planned to start in the middle of May, but at the last minute was postponed to June. This is the biggest negative aspect, as scarcity is usually of fundamental importance in establishing cryptocurrency value. The only limit is time, and with approximately 7 days and 7 hours to go, the ultimate amount Tezos will raise will likely be a lot bigger than it is now.

As Reuters reported in May, Tezos received investment from venture capitalist Tim Draper, which attracted additional interest to the startup. Draper is also going to invest in the US-based Dynamic Ledger Solutions Inc, the developer of Tezos. The details of the investment were not disclosed. According to Coinspeaker, Draper first unveiled his desire to take part in Tezos’ token offering in May, thus becoming the first prominent VC investor to participate in an ICO. Some industry players are still concerned about the possible risks of token sales and the lack of regulatory control.

Of course, the interest may wane in the coming days, and the ultimate amount Tezos will raise depends on the highly volatile Bitcoin and Ethereum cryptocurrencies. As Stan Schroeder points out, the price of both BTC and ETH has fallen considerably in the last several weeks; if they were anywhere near their all-time highs (which they were around the time of the Bancor ICO), Tezos would already be sitting on more than $250 million. It is unclear if the recent drop in cryptos is linked to the giant ICO.

The growing popularity of cryptocurrencies owes everything to the system that makes it all possible — the blockchain. Basically, this is a highly secure digital ledger that’s decentralized because of the way it records information and transactions. It’s already impressive as it is, but the innovators behind blockchain startup Tezos want to take the technology even farther.

Tezos claims it allows for consensual upgrades to its protocols, which empowers it to govern itself via what the Tezos white paper calls a:

“self-amending” cryptoledger. “It facilitates formal verification, a technique which mathematically proves the correctness of the code governing transactions and boosts the security of the most sensitive or financially weighted smart contracts,”

“ICOs which are uncapped are dangerous as they imply and show a complete disregard for corporate discipline — and to an extent an element of disrespect for the investor. The question that needs to be asked is can the job be done with less money (…) and that throws a spotlight on the fairness and truthfulness of the proposition being offered.”

Despite their unregulated and risky nature, ICO crowdsales have become incredibly popular and generally very profitable. It’s proof that blockchains and cryptocurrencies are, indeed, changing the way we conduct business.