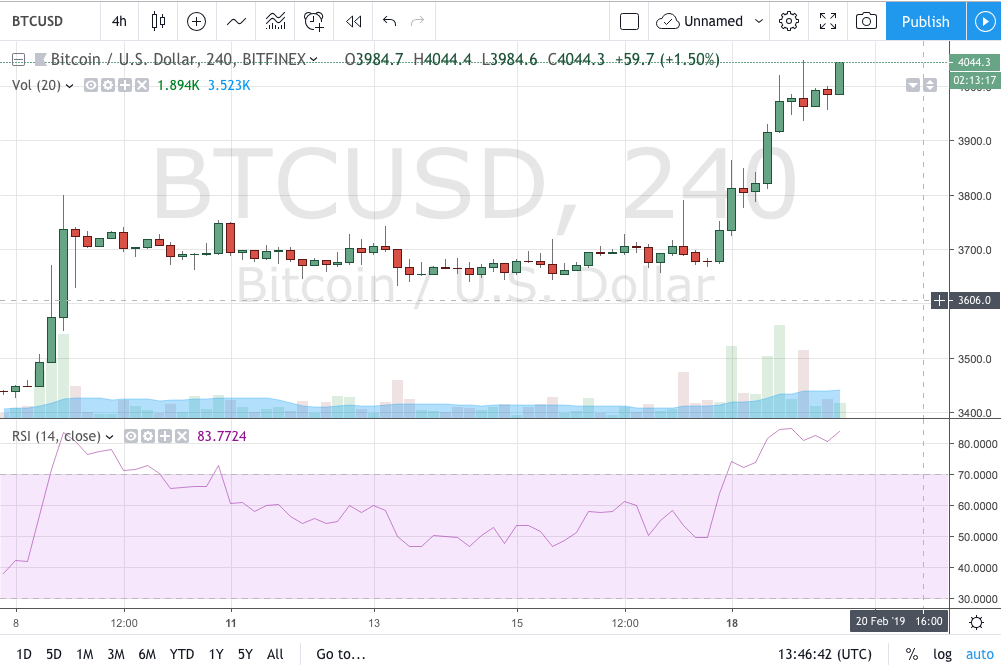 The 50-period EMA jumped above the 200-period EMA exactly when bitcoin posted a $100-long green candle on the 18th. Today we have seen continued bullish momentum and most significantly the move is coming with increasing volume.

The bitcoin price passed above $4,000 on Bitfinx and reached a session high of $4,070 at the time of writing, the highest since January 8th. The leading cryptocurrency has built strong momentum in this rally.

To move above the long term downtrend bitcoin has to move above $4,200. That is the high from December and was the 15-week moving average before the last breakout.

However, caution is advised before trading this breakout as it will take a breach of the 50-week moving average before a recovery is underway.

“Not looking to short until the demarcated zone.”

With the latest price moves we are just entering that zone now.

The continued rally today is part of a surge upwards that began at the end of the weekend and has continued into the week. On Monday bitcoin and and entire crypto market rose to 5-week highs due to a mixture of technical and fundamental forces.

The significant rise in volumes has made sure the breakout has a chance of being sustained. More then $10 billion worth of bitcoin was traded on exchanges during the last 24 hours. This is the highest volume since April 2018.

Rakuten On Brink of Adding Cyp..