Security Token Trading To Be Enabled By Binance And Malta St... 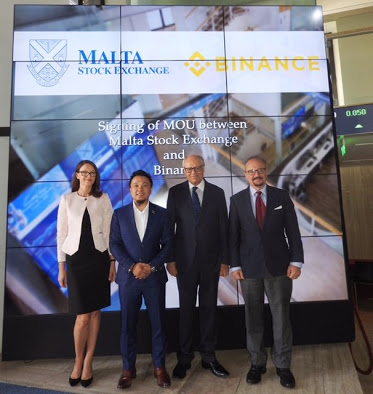 Like we have already known, Binance is the world’s largest crypto exchange by volume, while Malta Stock Exchange is the largest financial institution located at the Island nation of Malta. A local news site announced yesterday that the two firms would be teaming up to launch a security token trading platform.

The local news reported that the Chief Heads from both firms signed a memorandum of understanding (document) today in agreement to partner as one inorder to launch a security token trading platform in the small Island.

As was written by the local news agency in the country:

However, Malta’s Finance officer, Edward Scicluna, has been praising them for the steps they had taken towards bringing the new technology down to their own country, Malta. In his words,

“Although blockchain and cryptocurrencies have their risks, this is not an excuse to let it go by and be taken up by others”.

Joe Portelli of MSX at the press conference came out to say:
whether you like it or not, the technology is here to stay

The Country’s finance minister, Edward Scicluna, also stated that the country is trying its possible best to create an appropriate regulatory framework for the crypto industry. MSX PLC was later established as a new entity by “Malta Stock Exchange” (MSX) itself inorder to deeply explore financial technology and digital assets.

This is not the first time Binance firm went into partnership with Malta’s authorities. They have both corporated twice or more within the period of this year: In March, the company announced plans to set up an office and fiat-to-cryptocurrency exchange in Malta, and in June, it said it would support fintech startups and entrepreneurs together with the Malta Stock Exchange.

In conclusion, the blockchain sector is yet to be explored, maybe this particular step taken by the 2 firms mentioned above or steps taken by other firms might take blockchain to the promised land. All we can do now is to sit and watch how it goes.

A Crypto Predicting Tool To Be..