After Market Drops Bitcoin Is Back Over 50% Market Share

After Market Drops Bitcoin Is Back Over 50% Market Share 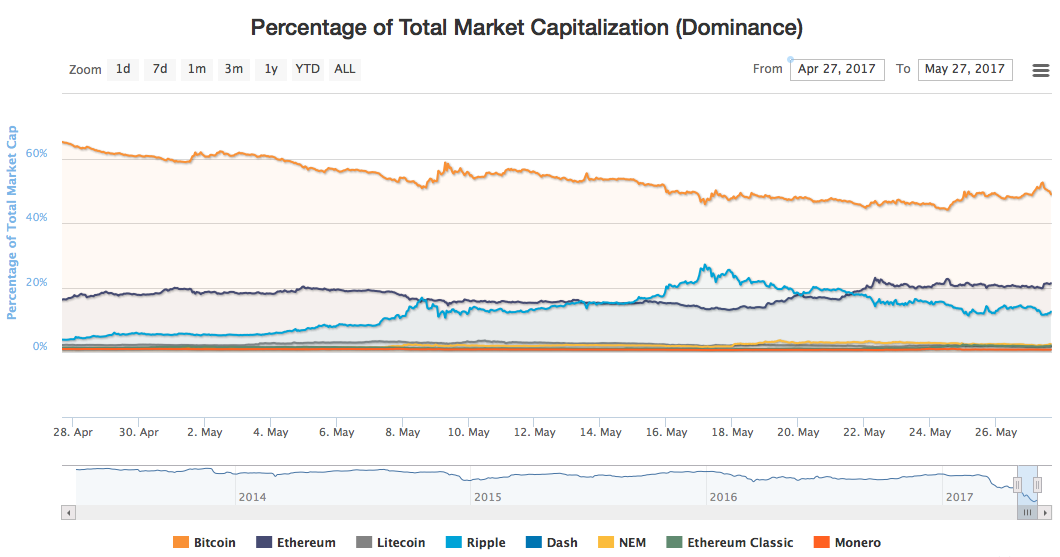 In a bear market, Bitcoin is taking back market share lost to altcoins. The recent drop of nearly 46 percent has led to Bitcoin  reasserting it’s dominance (Bitcoin’s market capitalization as a percentage of total cryptocurrency market capitalization) and it is now back over 50 percent. One of the real challengers to Bitcoin’s dominance has been Ripple. At its peak, Ripple had a market capitalization of $17 bln and accounted for about 25 percent of the total crypto market cap. However, over the last one week, its price has fallen sharply and it has lost approximately 60 percent of its value in BTC terms.

Other coins like Litecoin, Monero, Dash and NEM have risen substantially but have not mounted a serious challenge to Bitcoin.

It didn’t matter which altcoin you picked in March, almost all of them have gone through the roof. The frenzied demand for altcoins over the past few months has resulted in almost all coins witnessing a multifold increase in price.

While Bitcoin price has steadily increased, its dominance has steadily decreased as altcoins (Ethereum, Ripple, Dash amongst others) outperformed it. Bitcoin’s dominance went below the psychologically important level of 50 percent on May 16, in spite of Bitcoin scaling agreement negotiations.

This current bear market has seen the demand for tether has increase substantially. The value of one tether is supposed to be pegged to $1, but traders at crypto exchanges are now paying up to $1.08 for one tether. Buying tether are locks in profits by moving out of cryptocurrencies and traders would then look to reenter the market at an appropriate time. The premium payable for tether is expected to go down, once stability returns to the crypto markets.

Why Litecoin When There's Bitc..

The Bitcoin Bubble Pops, Is Re..