Breaking News: Bitcoin, Ethereum And Litecoin Can Now Be Bou...

Breaking News: Bitcoin, Ethereum And Litecoin Can Now Be Bought On Yahoo Finance 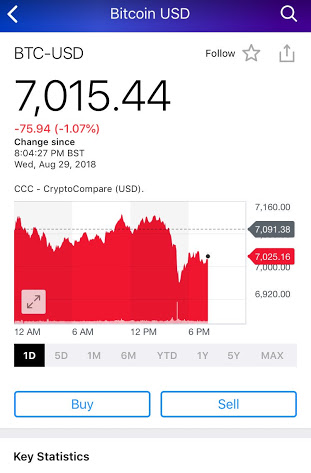 The latest blockchain need on air recently, states that trading of bitcoin  (BTC), Ethereum (ETH), and Litecoin (LTC) has been integrated on the Yahoo Finance platform.

While statistics are available on the platform for other digital currencies like Bitcoin Cash (BCH), Ethereum Classic (ETC) or EOS, they currently do not have buy and sell options.

The development has led some in the crypto community to say that it is an important step forward for crypto adoption.

BTC continues to trade slightly above the $7,000 price point, records have it, after it broke through the $7,000 threshold on August 28. At press time, the leading cryptocurrency is trading around $7,051.

ETH is trading around $289 at press time, down 1.36 percent over the last 24 hours, seeing negligible price change on a day before yesterday. On the 28th day of August, ETH saw the first major upswing in price performance after a faltering week range bound between $270-280.

LTC is currently trading around $61, down 1.74 percent on the day, according to CoinMarketCap. The total market capitalization of the altcoin is nearly $3.6 billion, while its trading volume over the past 24 hours totalled around $222 million.

The Japan-based internet giant, Yahoo, announced to the public few months ago that it will open its own cryptocurrency exchange in April next year or later. They intend doing this by purchasing 40% of BitARG Exchange Tokyo in April, and immediately dispatch executives to lay the foundations for the exchange to launch a year later.