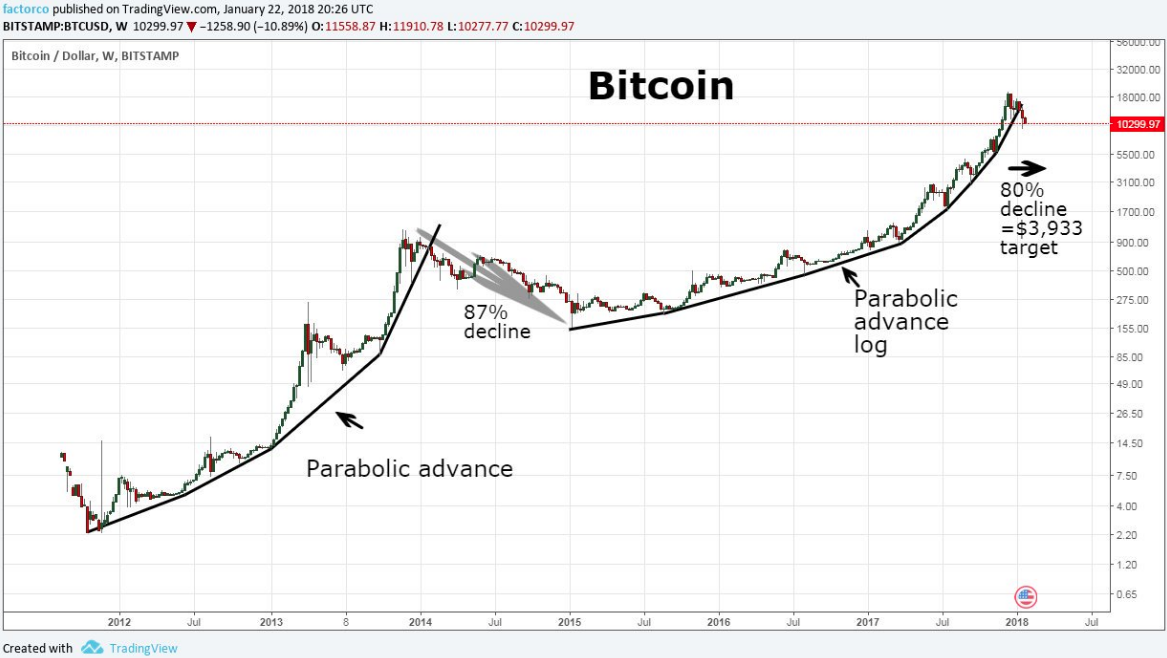 Bitcoin’s market cap has dropped nearly 84% during the course of 2018. Just after the bitcoin price peaked, veteran technical trader Peter Brandt made an incredibly accurate call in January, where he called for an 80% retrace of bitcoin’s parabolic advance, predicting it would drop to $3,933 price target. Bitcoin is currently trading around $4,000 having dropped as low as $3,140 earlier in December.

He tweeted in January:

General TA rule — violation of parabolic advance leads to 80%+ decline in value. If general rule is followed, BTC should retrace to <$4,000. Note: This Tweet does not make me a hater.

General TA rule — violation of parabolic advance leads to 80%+ decline in value. If general rule is followed, BTC should retrace to <$4,000. Note: This Tweet does not make me a hater. pic.twitter.com/jDNI1osinU

“I’ve seen that sort of thing take place so many times in the past. And they always end the same — prices always fall 80% to 90%.”

He added that any rise above $4,000 would more likely be a dead cat bounce rather than a true return to a bitcoin bull market. Brandt predicts a low of $1,200 if the dead cat bounce materialises and bitcoin dips below the key psychological level of $3,000 sometime by the end of Q1 2019.

“It’s a possibility, this is a strong downtrend. There is a tendency in bear markets to retest previous highs … but then I think it gets exciting again.”

In his original January tweet, Brandt was careful to note that his call for a more than 80% decline in bitcoin’s price didn’t mean he wasn’t a fan of the cryptocurrency long-term prospects.

He said about the possibility of bitcoin’s price falling to $1,200:

“Crypto won’t have any friends at that point. Even the crypto die-hards might start to think they are done with it.”