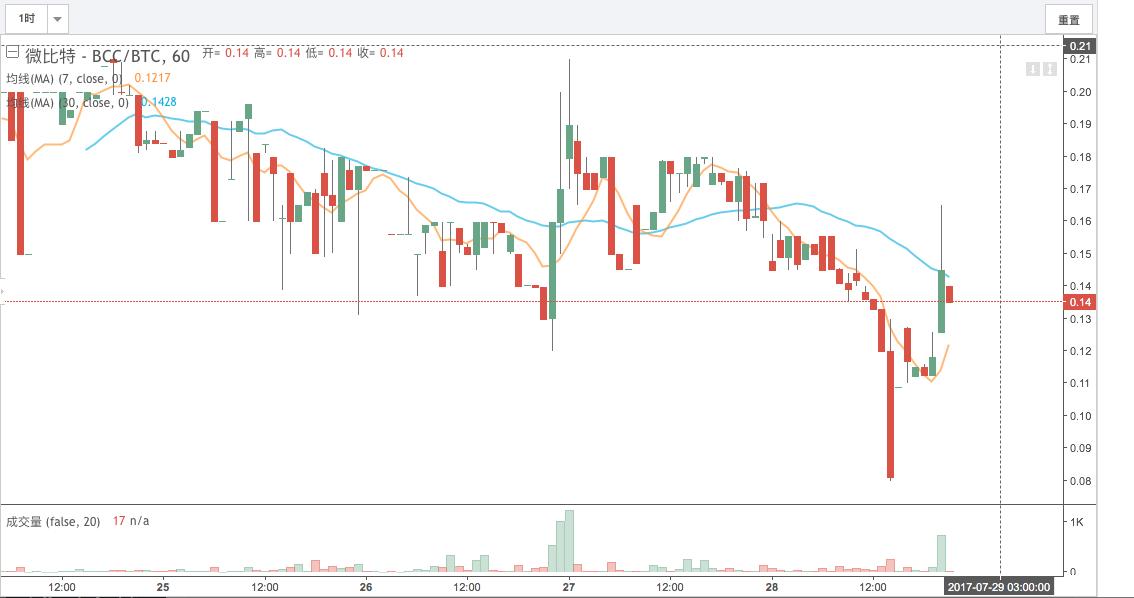 Chart data from ViaBTC shows the Bitcoin fork, which does not yet exist, fell from around 0.16 BTC to 0.08 BTC per coin in the last 24 hours. As with all big drops a correction has pushed the price back up to 0.14 BTC, but this still over 10 percent down on the day.

Exchanges have either come out with statements of support or have adopted a hands-off method, suggesting possible but not guaranteed interaction with BCC at a later date. Coinbase stands out as an exchange that says they will have nothing to do with BCC and will not trade it in any way.

The European exchange HitBTC announced it would join ViaBTC in offering futures trading for the fork, prior to crediting customer accounts with coins on both forks.

Meanwhile, Bitcoin’s price continues to move higher, passing $2,700 to reach a 24-hour high of $2,810, according to Coinmarketcap.

By contrast, Ethereum (ETH) remained stagnant, just over $190, and other coins in the top 10 cryptocurrencies saw declines of a few percent.

In case you have missed recent news regarding BCC here is a quick recap:

Bitcoin Cash is a token that may exist in the near future due to a user-activated hard fork (UAHF) that will bifurcate the Bitcoin blockchain into two branches. The UAHF was initially a contingency plan against the user-activated soft fork (UASF) announced by the bitcoin company Bitmain Technologies. Since this announcement, at the “Future of Bitcoin” conference a developer named Amaury Séchet revealed the Bitcoin ABC” (Adjustable Blocksize Cap) project and told the audience about the upcoming UAHF.

Following Séchet’s announcement and after Bitcoin ABC’s first client release, the project “Bitcoin Cash” (BCC) was announced. Bitcoin Cash will be pretty much the same as BTC minus a few things, like the Segregated Witness (Segwit) implementation and the Replace-by-Fee (RBF) feature. According to BCC, a few of the biggest differences between BTC and BCC will be three new additions to the bitcoin codebase that include;

SEC Rules ICOs Are Subject To ..