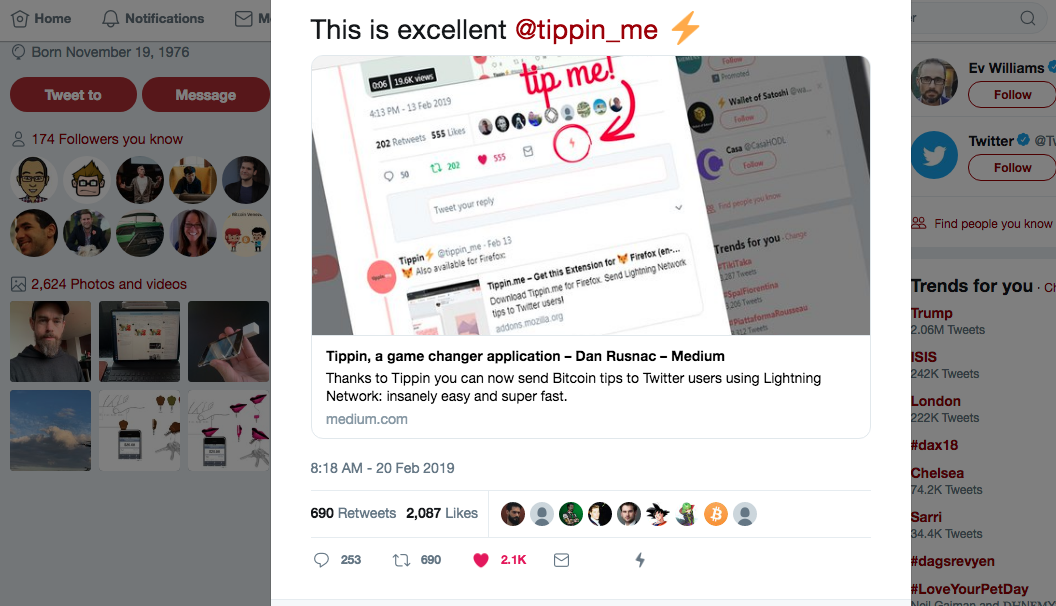 The Tippin App, released on Saturday, allows you to send Bitcoin tips to Twitter users using the Lightning Network. These tips can be tiny, only a few cents and they are sent and received instantly.

The new Chrome Extension available to Chrome browser users allows you send bitcoin payments via the Lightning Network, a second layer solution that allows bitcoin transactions to be sent at the speed of light at near zero cost.

With the Tippin App extension enabled, a little lightning bolt symbol is there in every every tweet next to the more familiar, “direct message”, “like” and “retweet” buttons.

The app is so good that even Twitter CEO Jack Dorsey tweeted:

The Tippin App is a personal project of Sergio Abril, still in beta phase but working perfectly so far. Coindaily talked to Sergio and asked him why he added Tippin to Twitter:

“From the very beginning, I wanted the Tippin App to be an “easy-to-use” service; Lightning Network micro payments (or tips) made easy.  I didn’t want people to struggle with complex signup processes, so I went for a Twitter exclusive signup system: You go to Tippin.me, you click one button to sign up, you accept Twitter authorization, and then you have a Tippin profile with an easy to remember username (Your same Twitter handle). Just like that, within seconds, your Twitter handle starts existing on Tippin and can receive tips.”

Sergio expanded on the future of Micro payments:

“Micro payments are finally possibility, and probably an alternative to advertising in some cases. Rewarding users for their content is really nice, and Twitter was a really good candidate for this. With that in mind, and making use of the fact that every Tippin user has the same username on Twitter, the next logical step was to bring Tippin’s tip system to the later. How? Adding a small button in every tweet with a browser extension. I think it’s awesome and also encourages good content!”

Sergio is also a game developer who created the game Starman:

Receiving tips is simple with the Tippin App

Every user that want to enable the possibility of receiving tips just has to visit tippin.me and sign-up with their twitter account. Once this is done a custodial wallet to receive and manage Bitcoins through Lightning Network will be generated and people will be able to tip you.

The custodial wallet might put some people off, but Sergio explains why it’s a good trade-off to achieve simplicity of use:

“The main goal was to push Lightning Network adoption, and for that I had to simplify how people interacted with the whole process. People had to create a one-time-use invoice, often for a specific amount (which isn’t practical since the one tipping couldn’t choose how much to pay), and be online until the tip was received. Also, you needed to ask the receiver of the tip to send you that invoice first, which doesn’t make sense at all. I thought we needed something like an always-online identity, where you could always have freshly generated QR-codes with an unspecified amount. For all these, I just couldn’t figure out how to do it without going custodial. I totally understand concerns, and me myself don’t like it, but I like to think that it’s only temporary, and we are talking about small amounts. Nevertheless, I plan to offer some non custodial options in the future.”

You need a Lighting Wallet to start tippin

It’s probably still a good idea to only deposit small amounts in LN wallets ($10 should do it) and then you create a channel in order to make lightning transactions.

OpenOnce you’ve done that you can open a channel with tippin.me! Press on the lightning symbol (⚡) and after that press “create a channel with us”. Scan the QR code in your wallet app and you’re ready to start tippin!

Bitcoin and the promise of permissionless financial apps

Above all else tippin highlights the possibilities that Bitcoin always promised, that a developer with a good idea and the right coding skills can create something of great value and utility without asking for permission.

Tippin started as a personal side project a couple of months ago, so I could understand Lightning Network a bit more, and of course help push adoption, but it’s starting to get big. I’m really excited about it, because I’ve got a lot of ideas on how to improve it. I’d like to make Twitter integration better, create new ways of receiving Lightning Network tips on any other web service, help monetize content creators with micropayments across the web, and also turn Tippin into some kind of “name solver” for Lightning Network users, so you don’t have to scan a QR code every time you want to send a payment, which I think would be key for adoption. Of course, Lightning Network itself is still in Beta, so we have time to make this happen until it’s fully ready. Interesting times ahead I hope!

You can also add a code snippet to get Lightning Network tips in your website, just the like the button below. If you like this article perhaps you could tip us a few sats.