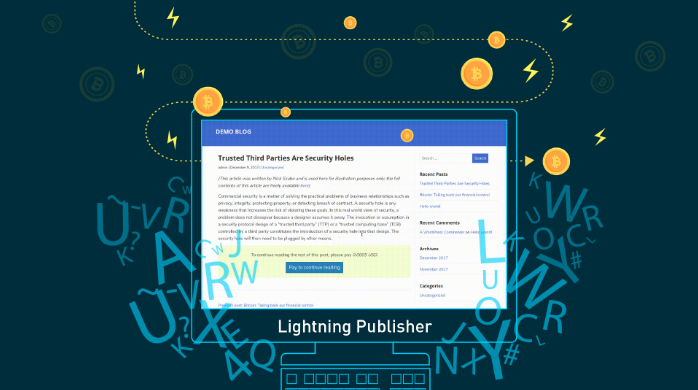 Blockstream Inc, has released a WordPress plugin that allows users to accept payment in Bitcoin and other Lightning network supported crypto-currencies. This is part of their plan to release a new Lightning App (LApp) every day for a week.

This is pretty significant for Lightning Network adoption as up to 30% of the entire web is powered by WordPress and more than 20% e-commerce stores are powered by Woo-commerce, a WordPress e-commerce plugin. By introducing a LApp for WordPress, Blockstream is edging one step closer towards the universal acceptance of Bitcoin.

The plugin is called Lightning Publisher and allows any WordPress publisher to accept Bitcoin via Lightning network instantly.

“Like FileBazaar, Lightning Publisher for WordPress helps content creators to break away from the constraints of traditional advertising-based web revenue and instead sets them on their own paths to independently conduct business online. It also gives readers more control: they can buy just the articles they want, when they want them, by sending instant micropayments to the publishers of their choice.”

The plugin comes from Blockstreams LApps development division under the hashtag name of Week of LApps (#WeekOfLApps), an initiative by Blockstream to release a new LApp every week. Blockstream has been instrumental in the development of the Lightning Network and the maintenance of the Bitcoin codebase.

Art Puzzles Offer Crypto To An..