The Easiest Way To Buy Bitcoin is #1 iOS App

The Easiest Way To Buy Bitcoin is #1 iOS App 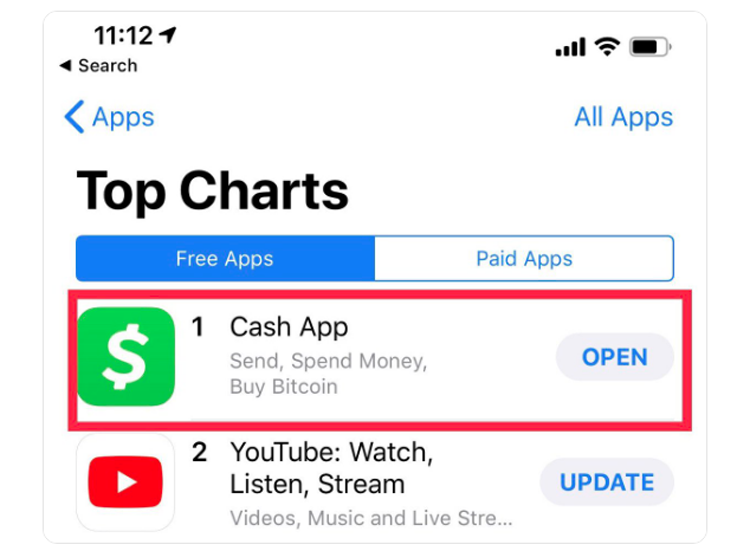 The Bitcoin-friendly Cash App moves above PayPal in Google Play Store and becomes the number 1 app in Apple’s iTunes store.

Square, called Cash App on Apple’s iOS store, is a payment platform for merchants and individual users. Founded by Twitter CEO Jack Dorsey, the app has surpassed Coinbase to become the most widely used iOS app to buy Bitcoin.

Prior to its integration of Bitcoin, Square was already used as a payments platform. It gained popularity among new generation users that don’t use the legacy banking systems.

With the Cash app, users can purchase Bitcoin efficiently because their bank accounts and credit cards are already connected to the application.

It’s clear that Square have deep pockets and are in this for the long haul. Speaking to CNBC in August, Square CFO Sarah Friar stated that the company does not consider its Bitcoin trading service as a major source of income and does not intend to generate large profits out of it.

Friar said that the strategy of the company is to drive utility in the Cash App and increase the liquidity of the asset.

“It’s not a major monetization engine. The goal is to continue to drive utility in the Cash App.”

Jack Dorsey, the CEO of Square, previously emphasized that Bitcoin means more to the company than simply a new area for revenue generation.

“Bitcoin, for us, is not stopping at buying and selling. We do believe that this is a transformational technology for our industry, and we want to learn as quickly as possible.”

Square’s Bitcoin integration almost instantly appealed to its existing user base, as a large portion of the global population that is interested in cryptocurrencies comes from the younger generation already familiar with using apps to conduct transactions.

Users can purchase Bitcoin efficiently because their bank accounts and credit cards are already connected to the app. However, if they want to buy on a regulated exchange like Coinbase or Gemini, the user would have to go to a bank and initiate a wire transfer to deposit a payment to the exchange.

Cryptocurrency exchanges also request new users to go through a rigorous Know Your Customer (KYC) verification period, demanding government-issued IDs such as a passport or a driving licenses, and in some cases, evidence of income or bank statement to increase the limit of the account. All of these are barriers to entry which slow adoption.

Therefore it should come as no real surprise that Square and the Cash app are now at the number one slot in iOS and on Android devices. Opening Bitcoin adoption to a rapidly growing and increasingly active user base.

Could Amazon Start The Next Bi..