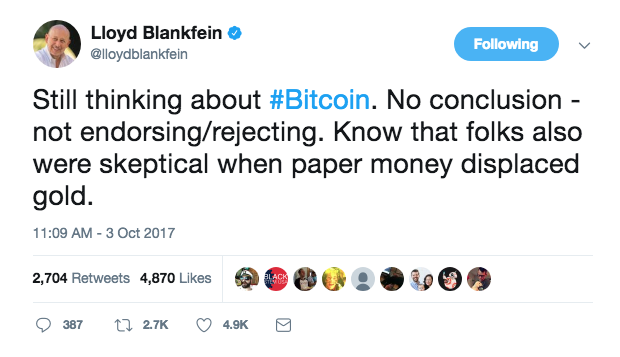 The CEO of the world’s largest asset manager sees “huge opportunities” for cryptocurrencies – but argues that work needs to be done before they become more widely accepted.

In a new interview with Bloomberg TV, BlackRock chief Larry Fink said that he’s a “big believer”, but that the current market today is primarily focused on speculation. His comments come months after the firm’s chief strategist said that, to him, the cryptocurrency market charts at the time looked “pretty scary.”

Fink said in the interview:

“Related to cryptocurrencies, I’m a big believer in the potential of what a cryptocurrency can do. You see huge opportunities, but what we’re talking about today, it’s much more of a speculative platform, people are speculating on it.”

Fink added that, thus far, his firm hasn’t seen much interest from clients beyond “some speculative stuff” – a notable comment given that firms like Goldman Sachs are reportedly eyeing new trading services around cryptocurrencies.

“We’re being asked that question but it’s more of a venture capital type of interchange, but we’re not hearing clients say ‘we want to use this as an asset class’,”

And while cryptocurrencies’ speculative nature is an issue for him, Fink argued their most important problem is that they are being utilized to launder money.

“As I said, it’s much more of a speculative platform for Asia, and it’s heavily used for money laundering,”

Then we have the CEO of Goldman Sachs, Lloyd Blankfein, writing on Twitter, saying that he was “Still thinking about bitcoin,”. He stated that he held an open – yet decidedly neutral – position on the cryptocurrency. “Still thinking about bitcoin,” CEO Lloyd Blankfein wrote on the social media platform, going on to say that he wasn’t giving his approval or disapproval.

Finally we have this remark, issued by Barclays’ vice chairman of corporate banking, Jeremy Wilson:

“We are in the process of developing a new operating system for the planet.”

This summed up the scope and tenor of discussion at the Blockchain for Finance conference held on Tuesday, 3rd October in Dublin. The event played host to an enthusiastic crowd of suits who were clearly in support of cryptoassets and blockchain technology.

Talking with a panel of executives from large financial institutions, Wilson issued his statement to add to the outlooks of other panelists assembled to provide an overview of blockchain work in the financial sector.

However, if Wilson appeared awe-struck at the enormity of the promise of blockchain and distributed ledger applications, he was equally critical of the work the industry is doing to assess ethical and moral dimensions of the coming impact.

Emmanuel Aidoo, director of blockchain at Credit Suisse, also hinted at fragile complexities. He likened the integration of blockchain into financial processes to a game of Jenga – you pull out the blocks from the bottom and hope that the tower doesn’t crumble.

But while few details about live implementations were forthcoming, all participants mentioned specific projects their institutions had undertaken. In contrast to years past, Wilson wasn’t a lone voice on the panel remarking on the potential of what is to come when these projects come to fruition.

“Asking us that is as if Tim Berners-Lee had just developed HTTP and you’re asking us if the internet will change the world.”

The rest of the day’s panels included discussions on trade finance, identity and cross-border payments, with almost all on stage emphasizing the potential for blockchain and the challenges in determining where to start.

Xavier Laurent, blockchain lead from Credit Agricole CIB, warned against trying to address the whole value chain at once, while Gadi Ruschin, CEO of blockchain startup Waves, agreed that digitizing a complete process is not realistic today.

Given the prevailing sense of caution, it is not surprising that most panels conveyed a mix of frustration at the complexity of the systemic and technological limitations. One theme that came up frequently was that of regulation, with Jean Devambez of BNP Paribas pointing out that there are more questions than answers for how legal frameworks will adjust to the capabilities of blockchain.

This is especially evident when it comes to the problem of identity on the blockchain, noted Anne-Marie Bohan, partner at law firm Matheson, arguing that the use case will be held up in the short-term, for legal rather than technological reasons.

As Oliver Naegele, founder and CEO of Blockchain Helix, explained, regulators tend to be technology neutral – rather, it is the processes and the protections that they care about. Elsewhere, their evolving role was also food for thought, shedding light on new responsibilities and expectations.

“The key question is, what is the role of the regulator in this new world?”

However, these questions didn’t go entirely unanswered, with representatives from global lawmaking bodies in the closing panel. Peteris Zilgalvis of the European Commission talked about how the political arm of the 28-nation bloc might approach regulation going forward. He expressed his desire to combine a cautious approach with a desire to identify and get ahead of the issues that need addressing.

As well as enhancing supervisory convergence and expanding supervision, Zilgalvis hinted at an increasing focus on the development of a coherent infrastructure.

Highlighting what is to come in yet another regulatory tangle – that of self-executing pieces of blockchain code called smart contracts, he concludes:

“Smart contracts might need regulation if we want to make them legally binding.”

Dubai Set to Launch Own Digita..