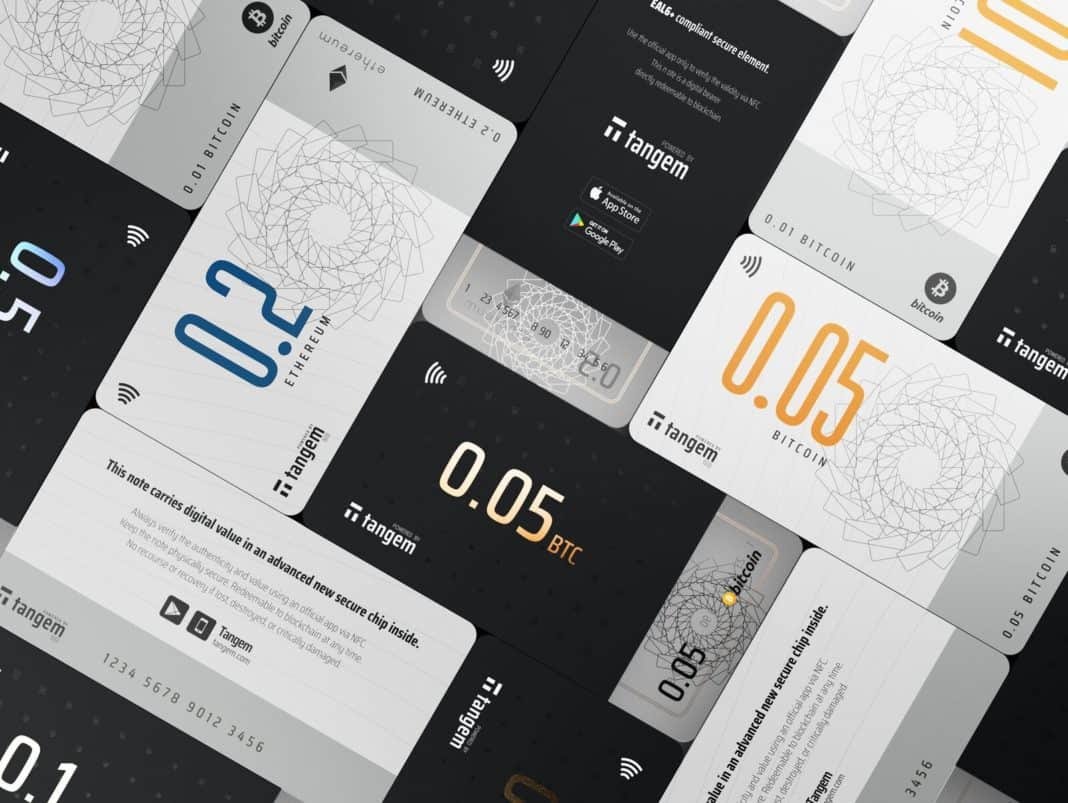 Bitcoin has now gone physical; crypto startup Tangem, which bills itself as developing ‘the first smart banknote for digital assets’ has just launched the pilot sale of its ‘Tangem notes’ in Singapore with it’s value expressed in Bitcoin in these denominations: 0.01BTC (~$93) and 0.05BTC (~$465)

Tangem’s cofounder Andrew Pantyukhin elaborates in an interview with Hackernoon:

“Unlike using crypto currency online, physical transactions are immediate, free, anonymous and there are no fees. They are truly decentralized, meaning it will never be restricted by technological limitations.”

Ease of use is another primary motivator. Everyone involved in crypto understands that usability is the main barrier to entry to mainstream adoption. Even something as simple as setting up a crypto wallet and keeping it secure can seem daunting to newbies. On the other hand, everybody understands how physical cash works and how to keep it safe. The construction of the Tangem note is not the physical fiat currency, the Tangem note isn’t made of paper, instead, it’s a semiconductor chip, specifically a Samsung Semiconductor S3D350A. The chip technology has been used and refined for decades in applications ranging from military to government. But it was only in 2017 that a breakthrough in the technology allowed for a chip that was both secure and had advanced cryptography support.

According to Pantyukhin, these tamper-proof chips, which have nine levels of physical protection, address “all known attack vectors on hardware and software levels.” These chips are certified to the Common Criteria EAL6+ and EMVCo security standards. The Kudelski Group, a global leader in digital security, is also conducting a comprehensive security audit of the chips. Further, each banknote is self-contained; even if malicious actors were able to hack into a single chip, they would not be able to compromise the other banknotes in circulation. This also makes hacking them an uneconomical proposition.

Singapore is hub for financial innovation

Tangem’s decision to launch its first pilot sale in Singapore shouldn’t be surprising. The tiny city-state has thrived by serving as the financial and commercial hub of South East Asia, and its financial regulators are ahead of its peers when it comes to blockchain technology and cryptocurrencies. Its central bank, the Monetary Authority of Singapore, has developed blockchain-based software prototypes for decentralized interbank payments and settlements as leader of a consortium with financial institutions and technology companies.

Of course, Tangem is already planning commercial pilot sales in other regions of the world. The company is delivering its first shipment of 10,000 notes to prospective partners and distributors for commercial pilots. While Pantyukhin has shared that the banknotes have a current production cost of $2, he says that if scaled to billions of units, the production cost will be equivalent to that of present paper banknotes.

The Tangem notes are available for sale at Megafash Suntec City store Singapore.

Do you think such innovation will facilitate further adoption of Bitcoin on a global scale? Let us know what you think in the comment section.