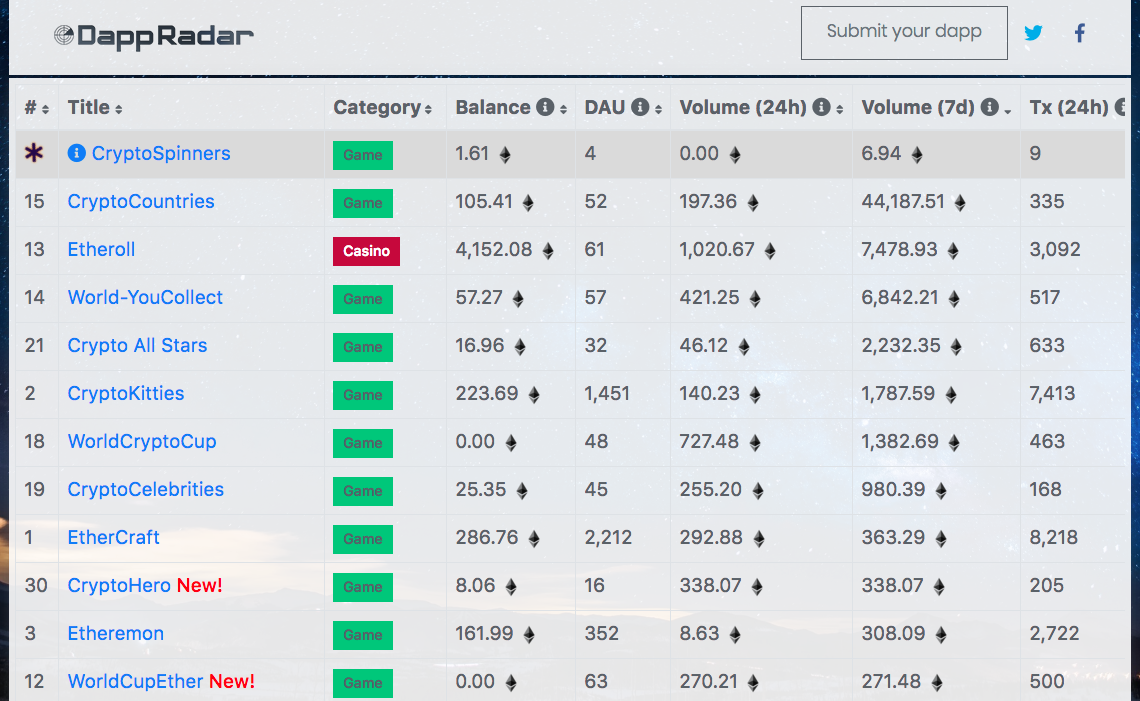 In the last 24 hours alone, one Ethereum game developer earned more than $500,000 from an Ethereum game. We know this not because the developer has announced it, but because a new website called DappRadar tracks most of the Ethereum games and ranks them based on the 24-hour performance.

These are Ethereum games because their code runs on the Ethereum blockchain. Most often not all the code, but the one that is responsible for the main logic of the game.

Almost all Ethereum games have one thing in common — they are all open source. It means that everyone can read the code of the game and make sure it does not have any shady intentions.

That means there is no way for the people running the game to cheat, or change something to suit their own agenda. The code can be read by anybody to make sure there is no cheating.

So who is this developer that just made half a million dollars?

CryptoCountries is an Ethereum game where you can purchase a land on virtual map. Once you purchase a land for a certain price, that price increases and anyone can buy it from you too. If that happens, you receive that amount to your wallet. Basically, if someone buys a land from you, you earn Ether.

The developer makes money from a fee on every transaction. The fee is 2–5% of transaction value. The bigger the value is, the lower the fee percent is. For example, buying a land for 10 ETH would have a 2% fee while purchasing one for 0.05 ETH would cost a 5% fee.

CryptoCountries went viral yesterday morning and in less than 24 hours its users made transactions for 31,546 ETH. That is roughly $28,600,000 (according to this moment’s Ether value of $906).

We already know that the lowest fee for a transaction is 2% and we stick to this number. $28,600,000 * 0.02 = $572,000. This is the lowest amount the developer could have earned if all the transactions were over 5 Ether. Now note this is the minimum it could have been. It could have been much more, but still half a million dollars in one day is a pretty good income stream. The only question is can this game, and other Ethereum games, sustain their popularity.