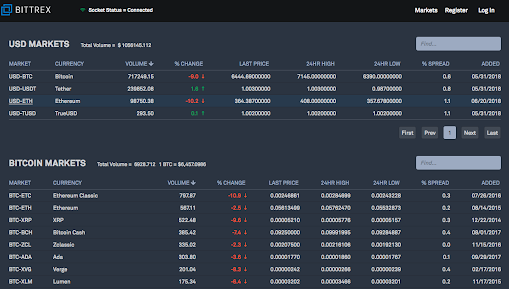 Reports coming in today from a reliable source states that Bittrex Plans To add ETC/USD and XRP/USD Trading Pairs.

According to the source, the new development would be implemented on the 20th day of this month as the platform intends to expand its fiat market to ethereum and XRP.

The company clearly stated that they would not be stopping at that, rather they would still work hard to see that other tokens are added to the USD market. The company stated further that it takes a gradual approach to “ramping up these markets” in order to ensure quality in processes and systems before making them available to qualified customers.

Founded in the year 2014, by 3 business partners with Bill Shihara at the forefront. They had all served in the security team at Amazon. The company announced to the public of their intention to open up USD trading to the majority of its customers in February this year

The exchange is currently the 23rd largest crypto exchange platform with an trade volume of $75 million. Coinmarketcap reported that the trade volume increased by 16% in the past 24 hr period

Today Marks The Launching Of A..