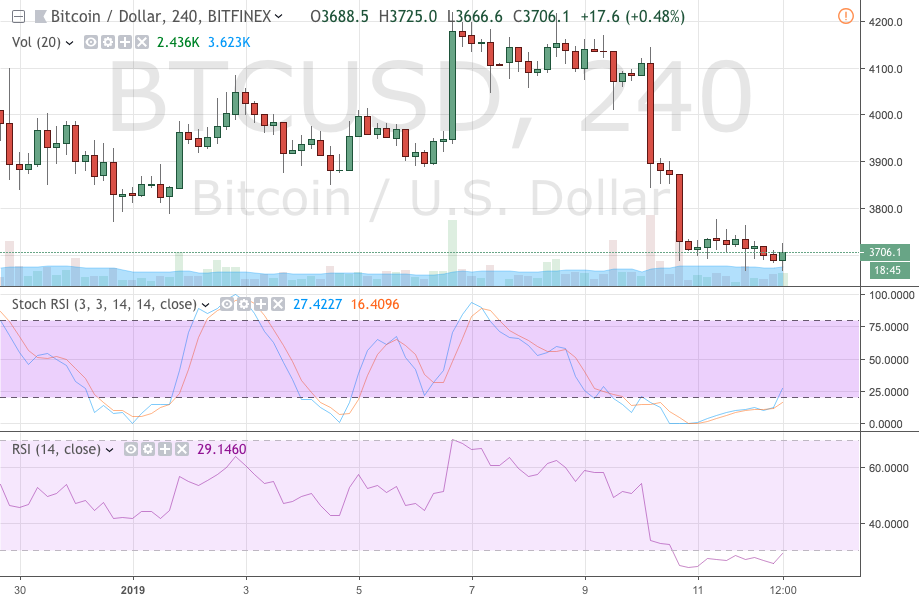 The Bitcoin price dropped below the $3,600 yesterday, the 11th January. Most major digital assets dropped by up to 15 percent. Following the drop in the price of BTC from $4,036 to $3,503, many traders expect bitcoin to fall below key support levels to as low as $3,300.

In mid-December, prior to Christmas Eve, many investors in the cryptocurrency market demonstrated renewed optimism toward a short-term trend reversal of Bitcoin and other major cryptocurrencies due to the strong recovery of BTC from its 12-month low at $3,122.

But, at the time, an FX hedge fund CEO Su Zhu said that buy walls on leading fiat-to-crypto exchanges in the likes of Coinbase and Bitstamp started to build up in the $3,200 to $3,300 range and investors began accumulating the asset at a low price range.

The short-term rally Bitcoin experienced from December 17 to 20 was essentially a corrective rally triggered by oversold conditions and given the lack of momentum of the asset throughout late December and early January, it was fairly evident that the probability of a proper short-term rally was low.

DonAlt, a crypto investor and technical analyst, said that a drop to $3,350 can be expected as a support level at $3,600 was cleanly breached.

“Clean break of support. If we do retest $3,700 on the weekend and don’t manage to close above there I’m expecting $3,350. I’ll most likely close my hedge short there. This is the reason why you shouldn’t trust mismatched patterns – it’s an easy way to get rekt,”

Clean break of support.
If we do retest 3700 on the weekend and don't manage to close above there I'm expecting ~3350.
I'll most likely close my hedge short there.
This is the reason why you shouldn't trust mismatched patterns – it's an easy way to get rekt. pic.twitter.com/IBVroGpptA

Ethereum, Bitcoin Cash, and other major cryptocurrencies recorded 15 percent falls against the U.S. dollar, while Bitcoin dropped by more than 10 percent in a 48-hour period. Ethereum, which many expected to maintain a positive upward price movement in anticipation of its Constantinople hard fork on January 14, was overtaken by Ripple.

Although the daily volume of Bitcoin and Ethereum still remain relatively high, the volume of the cryptocurrency market as a whole is only $15 billion, down $22 billion as recently as 10th January.

Technical Analyst and Trader Cred, indicated that he would not short from the current level, but he said:

Bitacium Prepares For The Most..